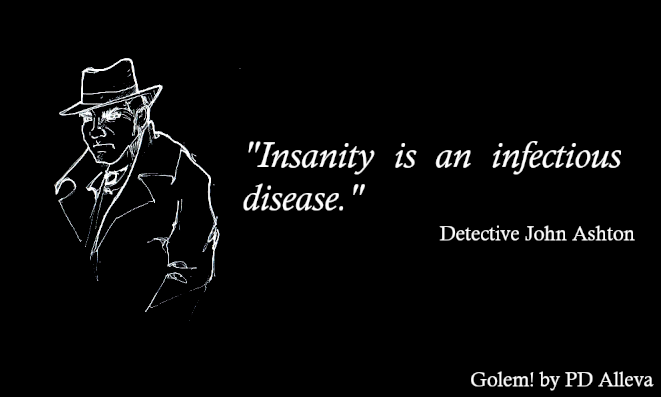 John Ashton has a secret, a secret he keeps buried deep inside his subconscious, fearful that others will see him as different should he allow his secret to be known. His mother referred to it as ‘the seeing;’ the ability to see what hides beneath the surface, behind the lies, and in between the folds of time.

John Ashton is a cop, an NYPD flatfoot who’s recent collar earned him his promotion to detective in the missing persons unit of the NYPD. His first case is to find the DA’s missing daughter, Isabelle; a high profile case that when solved could earn John accolades and accommodations for the rest of his career. Unfortunately his only lead is Alena Francon, a high society sculptor and philanthropist committed under duress to Bellevue’s Psychiatric Facility. John’s never had any experience with mental illness, and Alena’s story seems like a wild goose chase to the young detective, considering the fact that there’s not one person who corroborates Alena’s surreal claim that she incarnated a demonic presence into a statue she created in 1947. The same demonic presence she claims has kidnapped the DA’s daughter.

Problem is, Alena is his only lead, and according to Captain Knowles, John’s responsible for following up on any claims, no mater how insane they may seem. If he could just find someone who would shed some light on Alena’s story perhaps he’d have a bit more to go on. After all, inanimate objects don’t magically come to life. Do they?

Author Note: One of the many themes addressed in Golem is the theme of self-deception within each character and how they manipulate themselves or rather, allow themselves to be manipulated, and John Ashton is no exception to this rule of thumb. His internal conflict with the so called ‘seeing’ part of himself is based on societal norms, shame, and fear, resulting in self-denial, stuffing down the clairvoyant part of himself out of fear of being judged and seen as insane rather than the insightful police officer he is. Shame follows our young detective through the busy Manhattan streets, as he searches Alena Francon’s claims about an inanimate object that she purports has come to life to strangle the very breath of society. But is he going to need that seeing part of him to confront the demonic presence that is Golem? Hmm, seems we will just have to find out those answers on October 5th, Golem’s official release day.

Golem is currently available for Preorder on Amazon and Kindle Unlimited by following this link.

Hardcovers and Paperbacks will be available on release day October 5, 2021.

If you enjoy free books and book clubs, we are currently reading Golem as our September read in the PD Alleva Reader Group and Book Club. Would love to see you there. Click here to join the discussion.