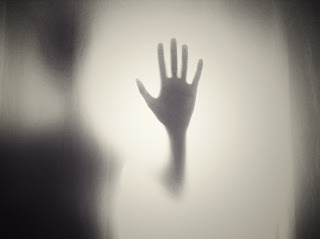 Cult classic films have steadily opened doors for aspiring filmmakers while spawning sequels and franchises all the way back to Hollywood’s’ Golden Era. Silent films like The Cabinet of Dr. Caligari, The Golem, and Dr. Jekyll and Mr. Hyde gripped audiences with brilliant storytelling on the heels of classic horror novels Frankenstein, Draculaand of course scores of Edgar Allen Poe stories. Human nature has always been intrigued by the dark side of the human condition, the supernatural, and the mysterious while yearning for terror filled gasps associated with a jumping, skipping beating heart.

When we think about the impact cult horror films have had on the industry – and of course the horror genre – we can easily see the streamline effect movies such as Night of the Living Dead, Halloween, The Texas Chainsaw Massacre, The Exorcist, and Psychohave had on mainstream movie making. We love to be wowed by horror movies, cut to the bone and scared to all bloody hell with what’s happening on screen. So, what do the above movies all have in common? They are all considered cult classics. And they have all received an uncanny devotion by filmmakers and moviegoers word wide, either through numerous sequels or similar themes.

No one has to think very hard to come up with examples of slasher films (there’s always some nut job in town for one night to reek havoc on sinful teenagers), paranormal and supernatural ghost frights, and mentally ill psychopaths tortured in their tragedy-riddled youths now seeking retribution on unsuspecting human beings. We don’t even have to mention zombies now do we?  If I had a dime for every zombie novel, movie or television show I’d be living on my own private island.

So what makes a cult classic a cult classic? Well obviously a devoted following, we wouldn’t be talking about these movies if they didn’t have a die-hard audience. Is it the scares? Or maybe the laughs? A mix of both perhaps? Or are they just so far out into left field the imagination required to birth such a film appears genius. Ok, maybe it is the surrealist laughs and bloody - bordering on ridiculous - gore. No movie ever amounts to anything that doesn’t tingle the senses, and these cult classics deliver every time. Scares, cringes, and more than a few head turns because if you kept watching you’d reverse gears on that popcorn. Oh, and laughs too.

I’ll also throw in an obvious point, the genius is in the creativity. The movies below (all except one) were produced in the 1970’s and 80’s, a decade or two before CGI changed the face of movie making. There’s a genius at hand in the making of these films, between special effects, costume design, make up and set design to filming at obscure (and cheap as hell) locations, who had time to be concerned about hiring good actors. There was a movie to make and the plot was genius (Killer Alien’s disguised as Clowns is pure genius, there I said it), throw a couple would be actors in there and roll camera.

Below is a list of cult horror films you should definitely watch. Why? Well, why not? You’re reading this blog for a reason. Being a young, morbid child of the early 80’s, the rise of the VHS brought these movies into cult stardom. I can’t tell you how many ‘B’ rated horror films I’d seen during this time, add in HBO and CineMax and it was ‘B’ movie heaven.

The list is in no particular order. Enjoy and leave comments below. I included an IMDb plot synopsis and link for each movie.

1. Killer Klowns From Outer Space (1988): I spent the summer watching this movie. Is it scary? Well, do clowns scare you and are you under six years old? If so, it will take your fear of those happy faced degenerates to new heights. If not, well, there’s nothing more enjoyable than a host of carnivorous alien clowns reeking havoc on a small town. 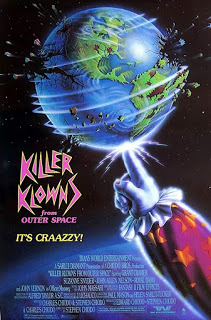 When a small town is invaded by aliens from outer space who are capturing and killing the townspeople, no one takes them seriously. Why? The aliens all look like circus clowns, use weapons that look clown like, and all have painted on smiles. Only a few of the young people in the town realize the danger and of course no one believes them. Armed with an ice cream truck they try and rescue their friends.

2. Death Race 2000 (1975):I actually never watched this movie until my mid twenties. Instantly fell in love with it. Especially seeing a young Sylvester Stallone. It’s a futuristic dystopian movie that foretells American’s lust for witnessing blood and carnage. And I absolutely love it when those skulls are obliterated, looks like they ran over a rotten watermelon. Splat! 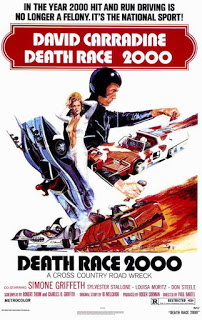 A champion of a brutal cross-country car race of the future where pedestrians are run down for points has a change of heart while being hounded by rivals and a conspiracy seeking to stop the race.

3. Bride of Frankenstein (1935):Why is this movie on this list you may ask? It’s old old old. This may be true, although true classics come in many forms and hold no prejudice for the black and white medium. If you’re a fan of Mary Shelly’s Frankensteinyou will love this black and white version. The original Boris Karloff movie holds no candle to this sequel, which actually tells Mary Shelley’s tale closer to the chest than the original. This movie makes my list of must watch movies during Halloween. 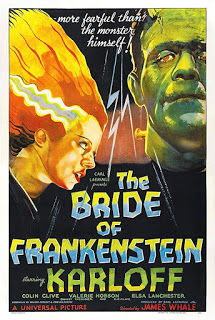 Dr. Frankenstein and his monster both turn out to be alive, not killed as previously believed. Dr. Frankenstein wants to get out of the evil experiment business, but when a mad scientist, Dr. Pretorius, kidnaps his wife, Dr. Frankenstein agrees to help him create a new creature, a woman, to be the companion of the monster.

4. The Toxic Avenger (1984):Ok, so I know I threw these movies into the ‘B’ movie category, however, Toxic Avenger drops a letter grade into the ‘C’ movie category, although it is a classic. If memory serves me correct Toxic Avenger was a film student experiment with the most completely ridiculous special effects, acting and storyline, although its bloody gory (more than a few severed limbs) and completely laughable. Give yourself a couple hours to digest this cult classic but you may want to skip the popcorn, those kernels hurt coming up. 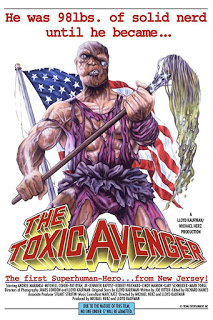 This is the story of Melvin, the Tromaville Health Club mop boy, who inadvertently and naively trusts the hedonistic, contemptuous and vain health club members, to the point of accidentally ending up in a vat of toxic waste. The devastating results then have a transmogrification effect, his alter ego is released, and the Toxic Avenger is born, to deadly and comical results. The local mop boy is now the local Superhero, the saviour of corruption, thuggish bullies and indifference. Troma classic with good make-up effects and stunts, a pleasant surprise indeed.

5. Evil Dead 2 (1987):My personal favorite of the Evil Dead series. I remember watching this movie at my thirteenth birthday party. Scared me right out of my mind. Fast paced demonology in a log cabin in the middle of the woods and that evil hand scene is just too much. 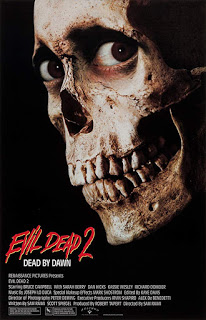 Ashley Williams travels to a secluded cabin in the woods with his girlfriend Linda where they find a tape recording of a professor and a book of evil. This unleashes a bunch of evil spirits that constantly terrorize Ash. Meanwhile a journalist comes to the area to study the book of evil. Ash and her end up having to survive this swarm of evil until morning comes.

6. Sleepaway Camp (1983):Who’s the killer stalking and murdering campers? It’s a mystery that offers physical clues to the killer but never a face, not until the end that is. I watched this one peeking through a hole in my blanket. 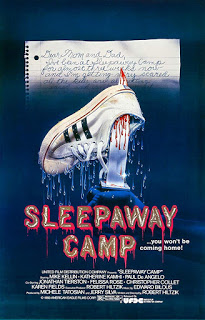 After a horrible boating accident kills her family, Angela, a shy and sullen young girl, moves in with her eccentric aunt Martha, alongside her protective cousin Ricky. One summer, Martha sends the kids to Camp Arawak. Soon after their arrival, a series of bizarre and increasingly violent accidents begins to claim the lives of various campers. Who is the twisted individual behind these murders? The disclosure of the murderer's identity is one of the most shocking climaxes in the history of American cinema.

7. The Gate (1987):Kids left home alone, a gateway to hell in the backyard. Little demons running amok. What else could you ask for? 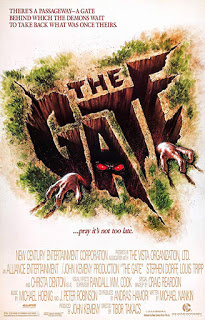 Two young boys accidentally release a horde of nasty, pint-sized demons from a hole in a suburban backyard. What follows is a classic battle between good and evil as the two kids struggle to overcome a nightmarish hell that literally begins to take over the Earth.