I’ve been told I write great action sequences. More than a few reviewers have reported they could see the scene as if they were watching a movie in their head. Not bad at all, I’ll definitely take that compliment. So, a few reviewers presented the question: “How do you do it?” Well, there’s a formula to it for sure, however, for the most part, and for me at least, I gather inspiration through music.

The Rose Vol. 1 was written to be an action packed, edge of your seat thriller that I refused to allow to let up. The story had to keep pumping, raising the stakes with twists and turns, and epic battle after epic battle. My goal was for the reader to anticipate upcoming fight scenes, wanting to read (and see) certain battles between specific characters.

I’ve always been a fan of epic battle scenes, The Matrix, Star Wars, and Mad Max Fury Road to name a few, always anticipating with bated breath the great upcoming battle between protagonist and antagonist. I can still remember my blood pumping when Luke Skywalker meets Darth Vader for the first time in Empire Strikes Back, that epic scene still gets me even today. So, I set out to create scenes and battles that carried a similar anticipation, knowing the battle had to become epic in the mind of the reader. It also helps if you add in a focus point, said focus being a weapon shared by both hero and villain.

The Blades, as they are referred to in The Rose, are a sacred alien martial arts weapon. (See below for an excerpt and a caricature of The Rose’s hero, Phil). I came up with the idea of The Blades about ten years ago when the thought of writing an epic sci-fi series first dropped into my mind. Fast forward ten years when I’m a spectator at my twin’s Karate dojo and I notice a weapons class going on and the students are using what looks like police batons or nightsticks. Come to find out the weapons they are using are called tonfas, wooden sticks with handles that fit in the palms and run down the forearms. And I said to myself, “Self, that would be a really cool weapon to use in a martial arts scene,” although I needed to raise the stakes, so instead of wood The Blades are made of alien steel. It’s like having a sword attached to your forearms during hand-to-hand combat. 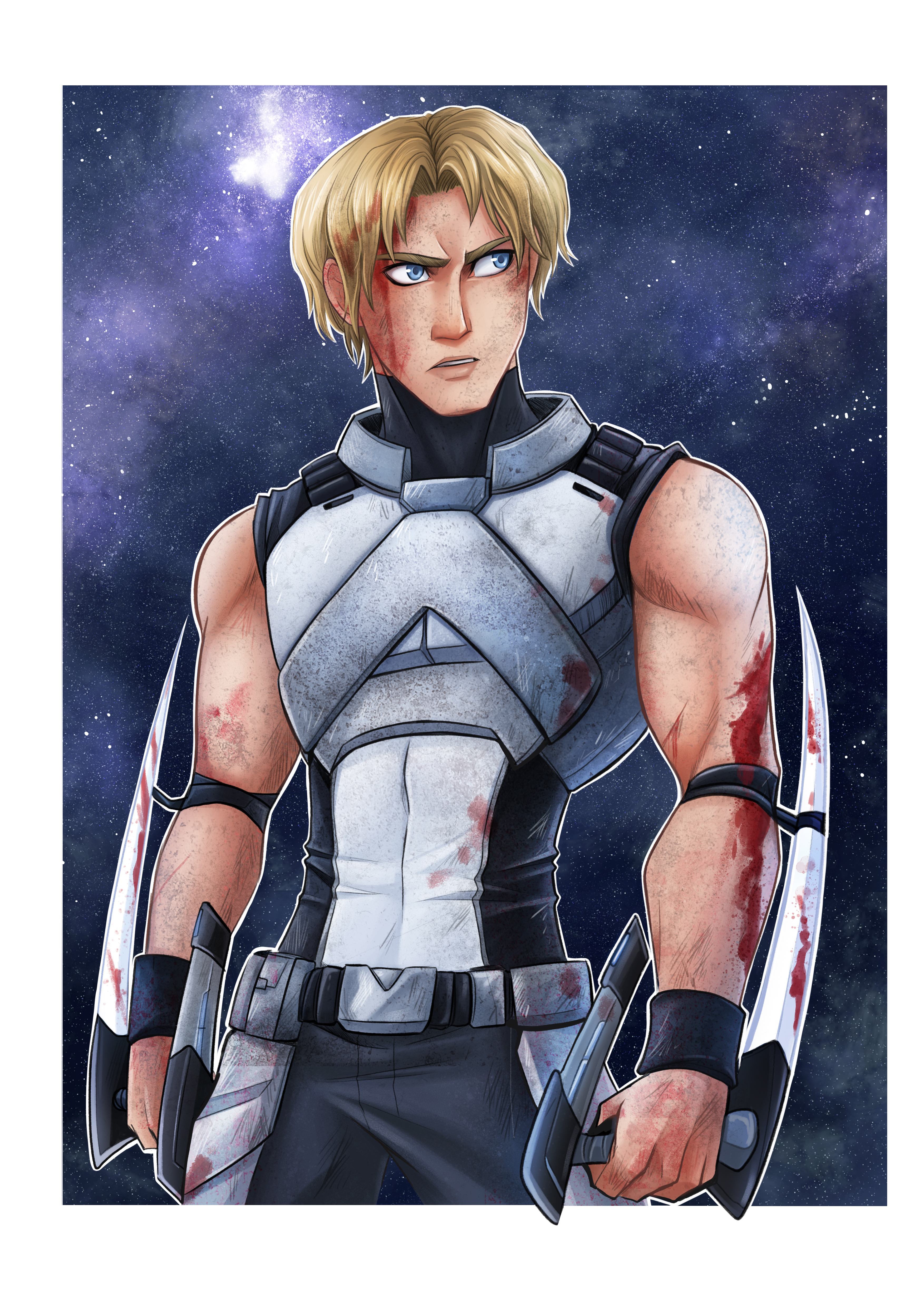 Now on to write the scene. When I picture the battle in my head it’s always like watching a trailer. Short, fast movements with a less is more philosophy. Allow the reader to fill in the gaps in their own mind. Allow the anticipation to build with an almost fatal blow that rocks and reels the reader to want more. Add in more than a few wild martial arts moves and then hit pause (briefly of course) with some poignant dialogue and epic one liners followed with raising the stakes on the scene with a distraction towards a pivotal part of the plot related to the action sequence, boomeranging back to the action scene with a satisfying WOW factor.

In order to accomplish this WOW factor I need inspiration. I find it necessary as a writer to feel like I’m smack dab in the middle of the action sequence, sometimes the passive phantom observer, and other times I need to become the character. I want to hear the growls, howls, moans and groans. Smell the blood and sweat. Feel the anger, the heart pounding, the pain, fear, and the blood boiling. Snarl and grind those teeth or fangs. The best way I can do this is through music. Two songs in particular helped me to achieve this goal: Pink Floyd’s Shine On You Crazy Diamond, and Led Zeppelin’s Kashmir.

It’s the guitar in both songs that get my blood pumping, building anticipation with David Gilmore’s classic four notes from Shine On You Crazy Diamond. I use this song to picture the beginning of each battle, the anticipation that something great and extraordinary is going to happen, watching and listening, allowing the mind, heart and blood to gear up and strap in for a wild ride. Like the beginning of a move trailer (one of those good ones) that captures the eye and brings on the thought, where is this going?

Interject with a classic one liner then bam, allow the action to unfold, sparks to fly, and blood to spill while rocking along to Led Zeppelin’s base pounding, drum ripping, hard hitting guitar genius, Kashmir. Oh yeah, the lyrics are pretty good too. Probably why a few beginning lines of Kashmirare quoted to begin the novel.

If you’re into hard hitting, blood pumping, extraordinary battle scenes pick up a copy of The Rose Vol. 1. Don’t be fooled by the title (you’ll understand the meaning quickly in the book), this isn’t a romantic vampire book, just an epic, pulse pounding, blood soaked thriller. One can’t write a book about alien vampires and not have the story reflect the ferocity and blood thirst that vampires require.

The blades were unharmed. The blades are a unique contraption with thin handles held in the palms, clamps that wrapped around the wrist and just above the elbow, connected by a thin, almost string like plastic. The metal blade descended from the handles down across the arm bone to the elbow clamp and locked into place. The metal they were made from was not of this earth and was able to collapse inside the handles and wrist clamp like tin foil crumples inside a fist. But this metal was strong and solid and unmatched to any substance on earth. The handles when pressed by the index finger would ignite the blades down the arm, locking in place. Another unique feature were the handles, fitted comfortably in the palm, when pressed with the thumbs would ignite claws of steel. A useful tool when needing to climb walls. Robyn had spent years teaching Phil the art of Kobudo Tonfa. An art he’d become supremely confident with.

Phil’s stare drifted to the full blood moon rising over the compound. Eyes wide, thinking: You know what that means. There’s more under the moon tonight than just alien vampires.And they come with teeth. The moon’s red glow crept across the landscape as Phil dipped his chin to his chest, grinding his teeth. Four simple words on the tip of his tongue…

“Get ready to bleed.”